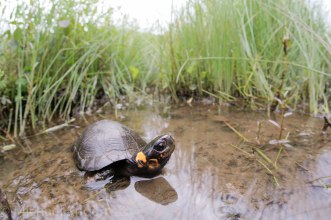 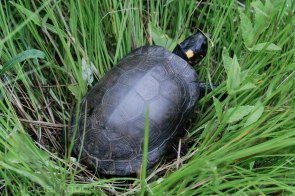 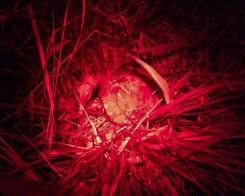 Endangered Bog turtles exist in southern Appalachian mountain bogs. These wetlands are incredibly rare and increasing isolated on the landscape. Thankfully, The Nature Conservancy has acquired and actively manages several of these wetlands for rare plants and animals, including the small and secretive bog turtle.  Mark-recapture data and population level analyses suggest that many bog turtle populations in the region are in decline. Fewer wetlands and extensive fragmentation of our landscapes mean that when the turtles wander, fewer of them make it home.  Another indicator of population decline is a lack of successful reproduction. Most of these populations are dominated by old turtles; we don’t find many juveniles. Some of our declining populations have experienced catastrophic nest predation in recent years, which means fewer babies entering the population. We think that increased nest predation is the result of more concentrated nesting areas being targeted by mesopredators (raccoons, opossums and skunks). These predators exist at higher densities on the landscape due to: 1) direct subsidization via our trash and gardens, 2) apex predators being rare or absent, and 3) fewer people that trap and hunt them.

Mike Knoerr with Clemson University’s Barrett Lab has partnered with The Nature Conservancy, NCWRC, USFWS and Zoo Knoxville to better understand these drivers of decline as well as to conduct applied management.  We are currently working to increase the quantity and quality of bog turtle nesting areas at select sites with the aim of putting more baby turtles into these wetlands. This May and June has been spent removing woody vegetation that has shaded out nesting areas. We have built a solar-powered electric fence around two core nesting areas to keep mesopredators at bay. We have also tracked many gravid bog turtles in order to find their nests and protect them with wire-mesh cages. We are currently monitoring those nests until they hatch. Although it may be an imperfect solution, our research suggests that a conservation strategy that periodically boosts recruitment can contribute substantially to stabilizing these populations. Vegetation thinning may provide more thermal-regulation opportunities and result in fewer turtles wandering off. This work is one piece of a larger puzzle in the effort to keep these turtles around. We’re thrilled to help!